Shopping Cart
Your Cart is Empty
Quantity:
Subtotal
Taxes
Shipping
Total
There was an error with PayPalClick here to try again

Thank you for your business!You should be receiving an order confirmation from Paypal shortly.Exit Shopping Cart

As with many layouts "Moorwestern" was started a number of years ago as a project that was going to be small, 10ft 6in x 3ft, and at the time was nameless.

I guess that it was started around 2010, 2011 when I lived in Daventry and the size of the layout was determined by having the layout in a bedroom, hence there were three 3ft 6in x 3ft boards raised on four sets of legs so that they would fit over two single beds and it was only ever intended to be an "end to end" unit.

After a period of time this arrangement wasn’t working and so having had some work done on the house, including a re-roof, it was decided to move the layout to the loft.

In the slideshow below Fig.1 shows how the boards were laid in the loft space and bolted together, just visible to the right are the ends of the cross bracing that was installed to maintain a level layout, no other fixing was required as the weight of the boards in the "V" of the roof trusses provided all the stability that was needed.

This took place in early 2013 and a permanent home for the layout had evolved, with space now being available thoughts turned to expansion with no real plans drawn up but thoughts of an extension across the loft at one end and a fiddle yard at the other were definite possibilities therefore materials were purchased and building commenced.

By late 2013 the layout had grown and I had taught myself to solder and all the electrics were in place.

As I would, in all probability, be the only one operating the layout I had decided from the outset that the layout would be Analogue. Point motors were fitted and also a good number of isolating sections were added which made it easy to move trains about.

I had decided at an early stage that I would concentrate on getting the layout running so that I could move trains as I wanted to without any electrical problems, hence no ballasting or scenery was done which would enable me to change the track format with very few problems if I needed to.

For some while the wife and I had been thinking of moving house but it had only been “thinking” however, by the end of June 2014 those thoughts became actions and we put the house on the market with the proviso that we could not move until the beginning of October as I was the Exhibition Manager for Daventry Model Railway Club and I had an exhibition to run.

Anyway houses don’t usually sell very quickly do they so we had plenty of time, it may not sell straight away.

BOMBSHELL !! The day after we advertised it we had a confirmed buyer and we were about to become homeless, to cut a long story short three days after the 2014 Exhibition at the beginning of October we moved into our current house in Cumbria which is within sight of the Settle to Carlisle line in Kirkby Stephen.

I had already designated the railway room in the new home and shortly after moving in assembly of the “new” layout started.

By good fortune I had stored the original legs which got me off to a great start and as we could not us the loft in the new house for storage an early start to the build was allowed by the "household authorities" so that we could use the space under the layout for that purpose.

With some careful reuse and positioning of the original boards, as shown in Fig 4, I was able to build the new layout to almost a full run "round-a- round" format with only one section, as shown in Fig 5, that had to be built from scratch.

I added back scene panels to the main Scenic area and when these were constructed I was able to add a further 5 inches to the width in that area as these are bolted on and are not intended to carry track, see Fig 6.

Once all the electrics had been reconnected and track proven for running in early 2015 it was time to start thinking about a name and location and of course this was to be a totally fictitious name.

Having been brought up in Great Western territory that was the region that I had decided to follow and setting it somewhere between Bristol and Exeter seemed favourite and so "Moorwestern" was born.

The period I had decided upon was to be between the 1948 Grouping and 1956 when the first era British Railways "Lion and Wheel" logos were in existence.

As I had intended to buy and run Ready to Run stock there was a good choice to be had from the major manufacturers both in terms of Locomotives and Rolling Stock.

The baseboards are constructed from 2 x 1 in plained timber in the usual ladder frame pattern topped with Sundeala for the most part however, the are some toppings in Plywood.

For the buildings I used Metcalfe Kits and while I appreciate that they are not, in the main prototypical they look good and in the words of the old saying “it’s my layout”.

The final 4 pictures in the slideshow portray the development of the scenics over the last 3 ½ years however, there is still work to be done in the area of the pictures but as with many things the layout has taken a bit of a back seat in the last six months. 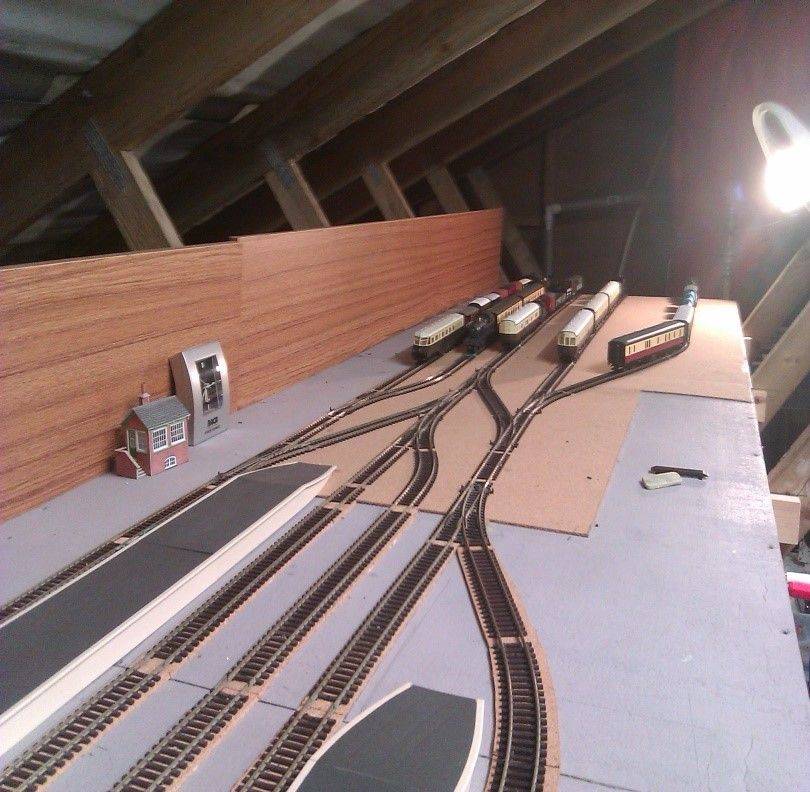 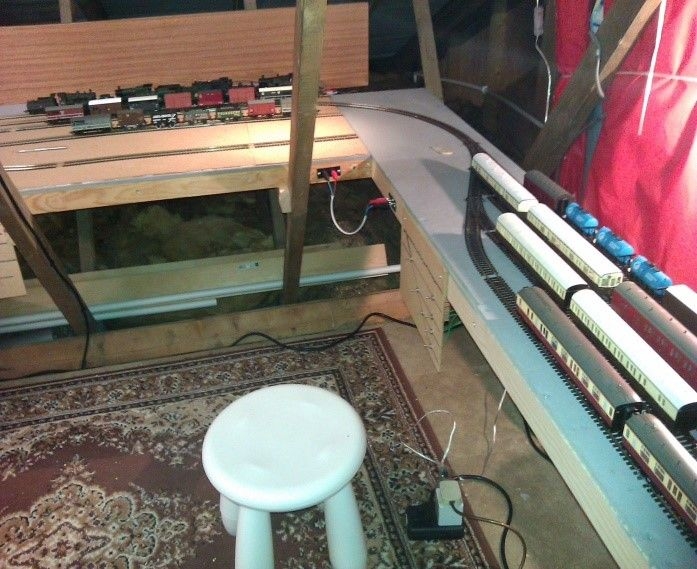 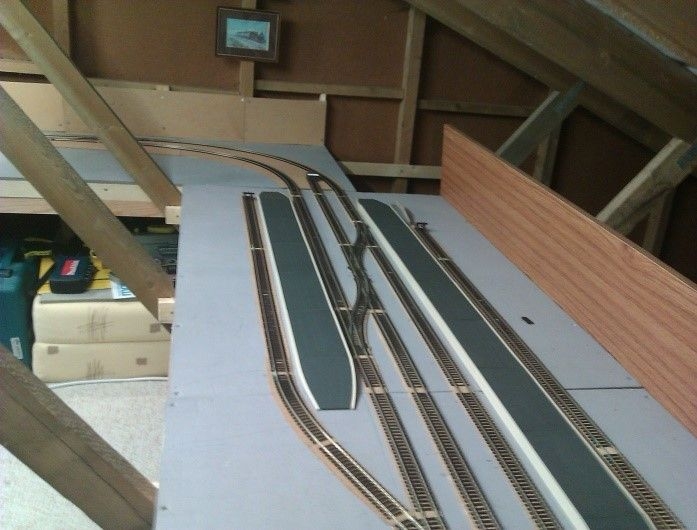 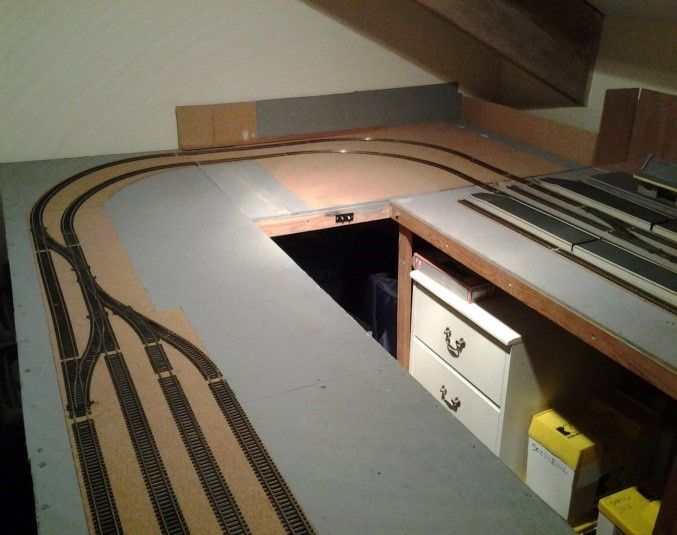 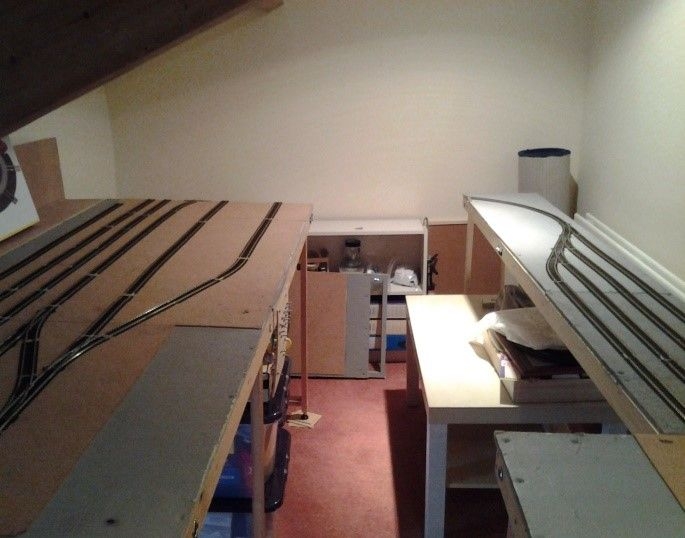 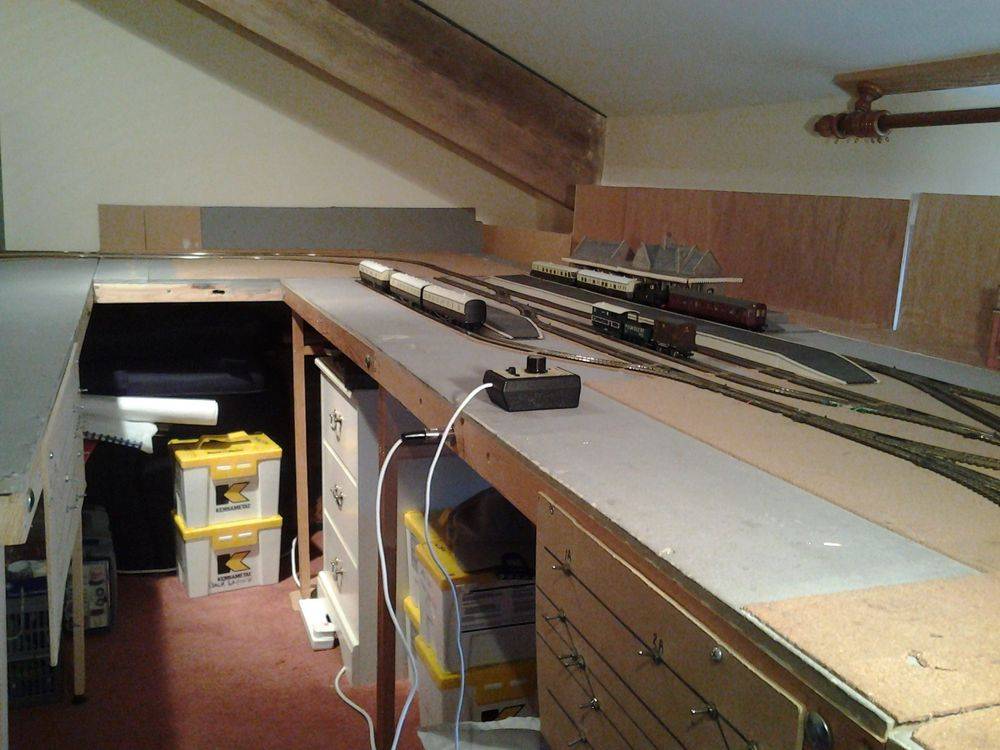 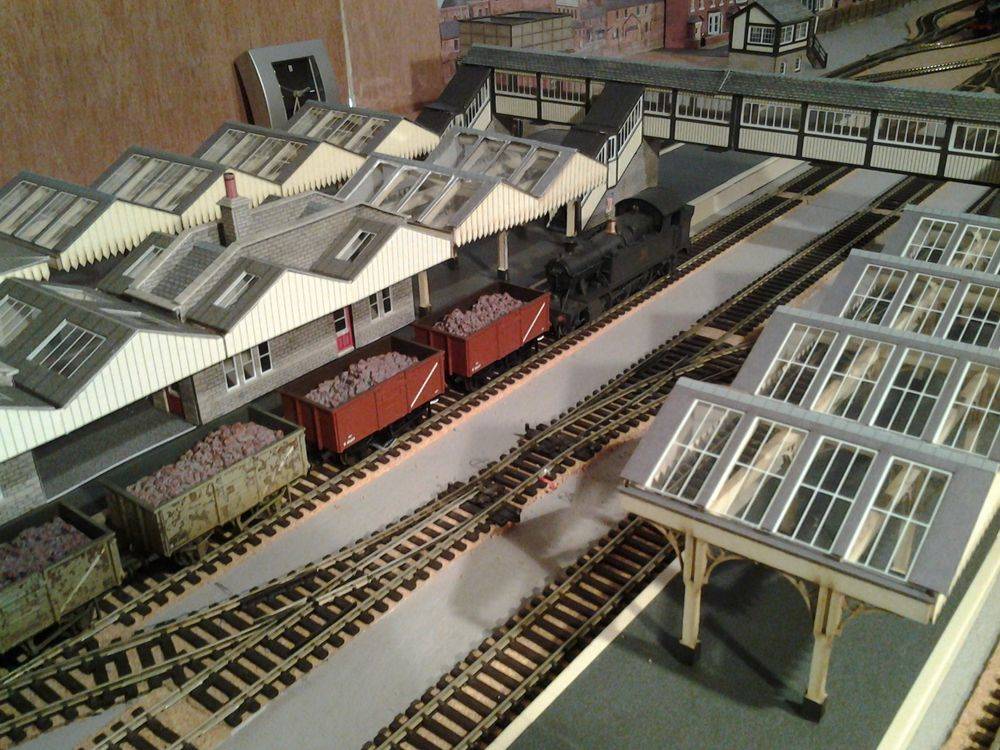 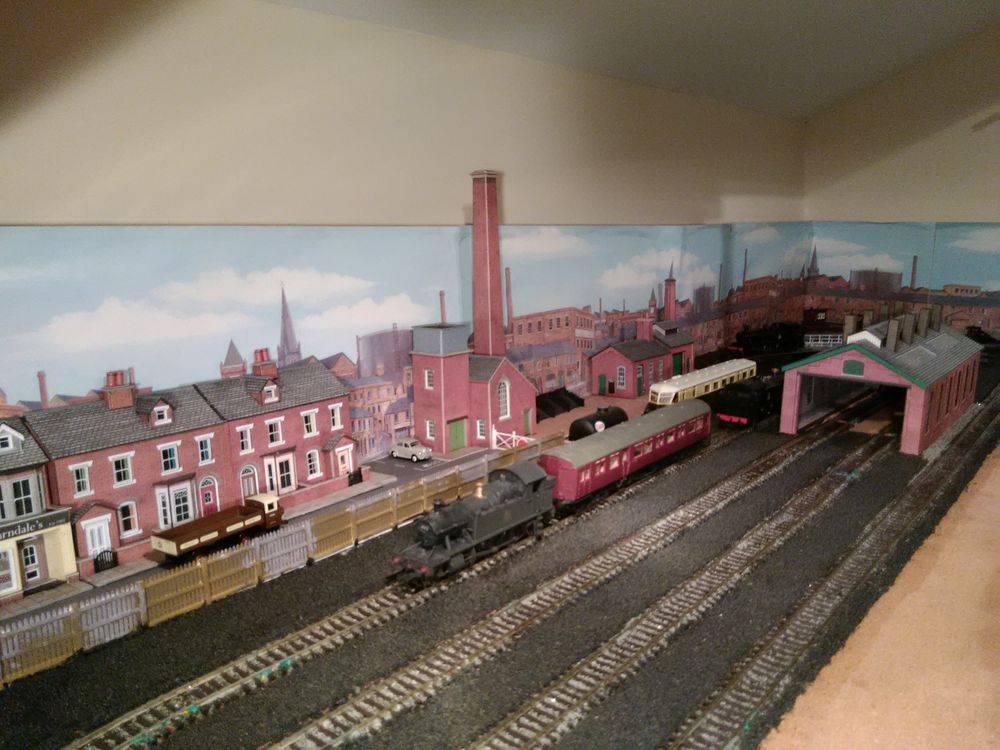 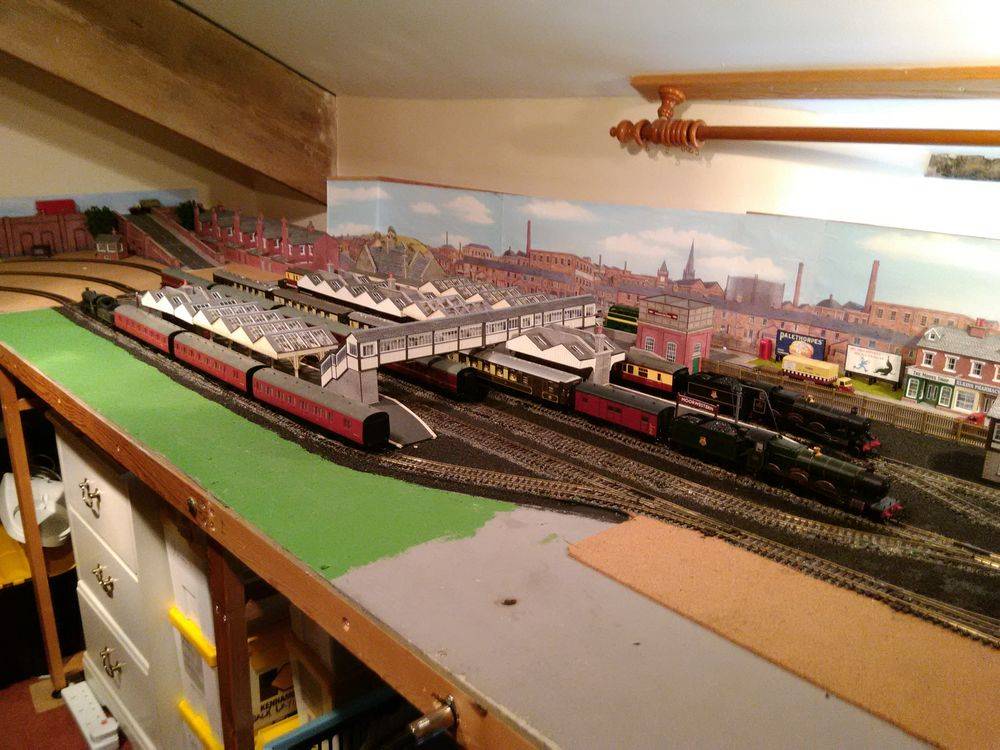 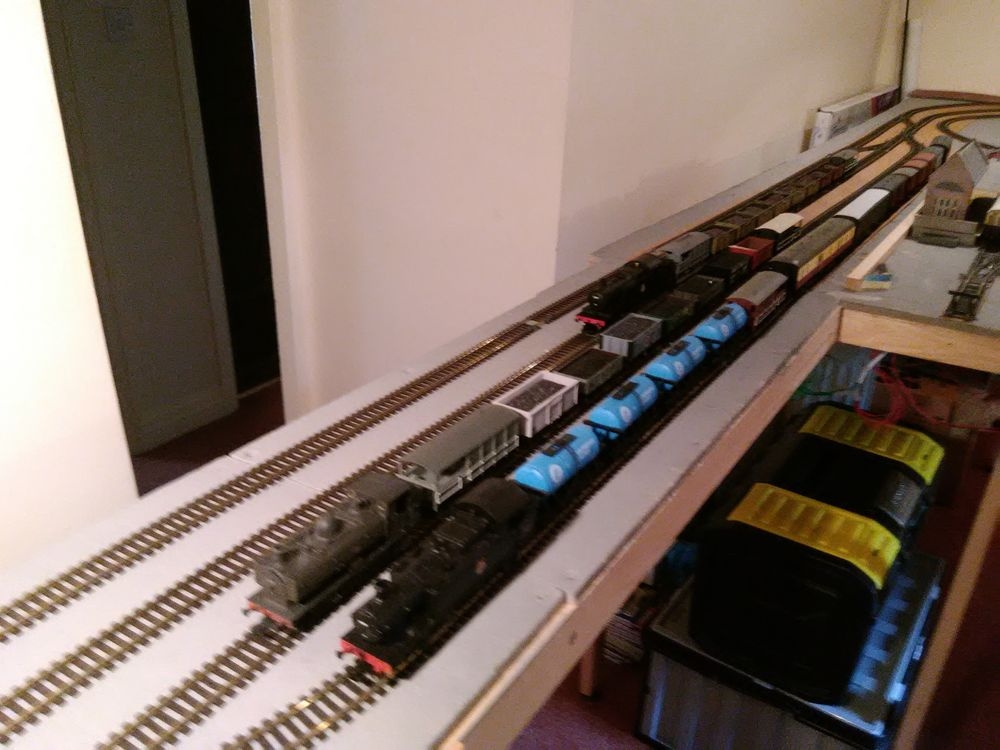